Today I choose to be grateful, thankful for what 2013 brought into my life. These include the memories (even though they weren’t so great, he tastes like you only sweeter – err, no). Kidding with the parenthetical remark. Yeah, sometimes my mind bursts into song, so forgive me for the Fall Out Boy reference there.

Truth be told, a lot of my memories this 2013 were great and it’s hard to pick only seven. But I can try.

Memory 1: Long Drive and Family Visit. Because I couldn’t go home for Christmas last year, guess who came over for a Post-Christmas + New Year visit? My family! Yey! How cool was it to have the four of us living together inside my apartment like it was some parallel universe where we all stayed under a roof on this side of Southeast Asia? And I got broken into my first super-mega-long-drive too. We went to Penang! It took us about six hours! And I drove a manually transmitted car! Yey!

Memory 2: Writing Revival. The first quarter of 2013 saw an abundance of blog posts both here and in my sorta-travel blog. I wrote in a somewhat feverish frenzy, churning out at least one entry per day. Things got a bit busy by the second quarter though. I started hitting the gym. I started focusing on other projects, too. But I kept writing. And I will keep writing still.

Memory 3: Bali Workation. I got to see Bali! And eat babi guling! Those two weeks in bali were definitely worth remembering. Maygash. I can still taste the babi guling.

Memory 4: Hearts All Over The World. We were churchmates in 2004. Awkwardly close friends in 2009. Ehrm, courter and courtee (okay fine — in the process) when the last quarter of 2011 rolled around. May 2013, I said yes to him. Not, “yes, I do”, but “yes, let’s be a pair” and “yes, I will subscribe to your magazine and all your issues”. Mushy, I know. But then again, I’ve always been full of cheese and mush.

Memory 5: Patico Nuptials + Tramian Adoption. Nanay Patty got hitched this year! Awesome, right? That was one sweet early morning wedding. May ushered in a new season for her and hubby Kuya Ico, but then May ushered in a new season for me, too. There were tears, there were singing (cue Mari’s shaky version of Christina Aguilera’s I turn to you) and some adoption-paper-signing (okay, not really) — 2013 truly marked a big transition in terms fathering in the spiritual sense. So… Group hug, everyone.

Memory 6: Online Learning. This year, I signed up for an online course. Though it won’t give me any credits or certification, it’s been giving me lots of fun information and inspiration. I’ll be sad when the course ends this December 20. Will we at least get some graduation rites? Huhu. (For those interested, my tumblr here keeps a record of things that I have been learning so far.)

And another yeah there.

Now who here believes that 2014 will be even better?

On the 6th Day of Christmas my true love gave to me… 6 geese-a-laying!

Six pictures that leave me smiling! Six pics that keep me grinning! Six — Uhh, whatever. The phrasing’s a bit off whichever way you try to sing it so never mind.

I didn’t realize it would be so hard to pick just six pictures from 2012. Browsing through my FB albums made me wish I could put all the photos posted there here.

But I must pick only six (did that phrase leave your tongue in a twist???) so here are the ones that made it to the list:

From the sad and lonely girl sitting next to (behind) me. 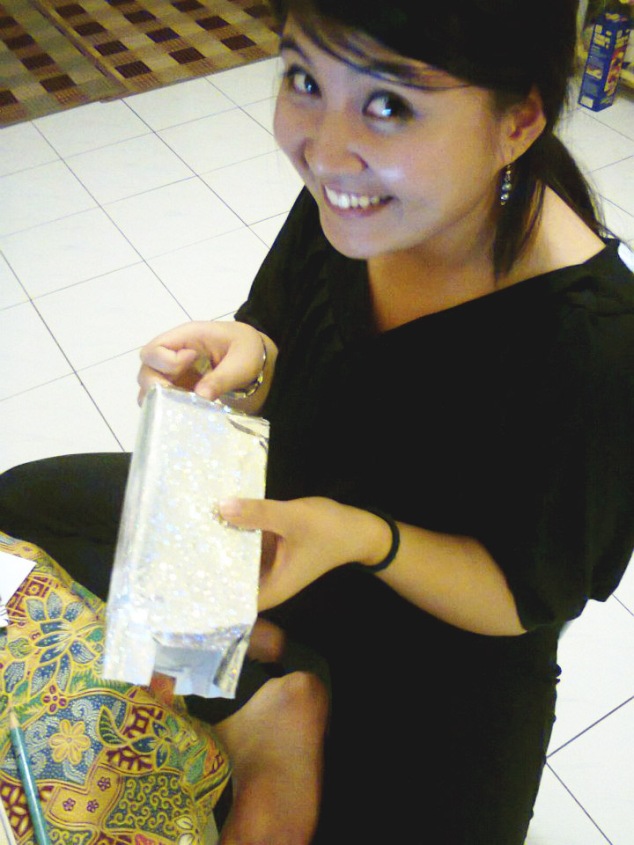 We are family!  (Photo from Arvin)

My family makes me smile. My friends at work make me smile. Getting surprises wrapped in shimmery wrapping paper (which I am likely to transform into tiny paper stars sooner or later) also makes me smile.

Fun jump shots with fun and passionate friends make me smile. Celebration of life  and singing my heart out at church and in choirs make me smile as well.

Did these pictures make you smile, too? :)