I should have known that I’d be the person most likely to fall down a rabbit hole. As a kid I would give lollipops out to strangers. I would give some out to Aling Nida, the frazzled lady who sold kikiam and fishball a skip and a leap past my elementary school. I would tuck strawberry flavoured ones into the back pockets of Kuya Ernesto, the jovial guard who stood watch over our subdivision’s wide iron gates. And I would carefully place chocolate and grape flavoured ones into the rusty tin cans the grubby street urchins held out to our car windows whenever our vehicle passed by the busy Bonifacio Street.

Inay would always scold me. She would raise her voice to ask me why on earth I would waste such precious candy. I would smile at her, saying that it just seemed like the nice thing to do. Ate Ella, who was ten years older than me, would usually come to my defence, asking Inay to forgive me because I was simply born naive and unsuspecting.

I don’t really think of myself as naive and unsuspecting. But I figure that’s what I must be, being under the predicament that I’m in now.

You see, I have never lost my lollipop-giving habit. A mere four hours ago — well, I think it was four hours, I can never be really sure — I saw an eight-or-nine-year-old boy wearing freshly pressed maroon waistcoat and fluffy white bunny ears zipping across my office’s half-empty parking lot. I had two extra sweets packed inside my daisy-patterned purse so I decided to chase him, thinking that he might have a younger sister donning similar ears, assuming that he and she might want the pieces of candy, too.

He was an energetic kid. I’d say he was quick as a rabbit, but that might be redundant because it was as if he was already a rabbit anyway.

I lost track of him, though I did try my hardest to run in my wobbly stilettos. But as I was about to give up and head back to the parking lot, I spotted a blur of white and maroon from a distance. I broke back into a run.

The next thing I knew, one of my heels snapped and I found myself whirling down a dark, humid, seemingly endless hole. 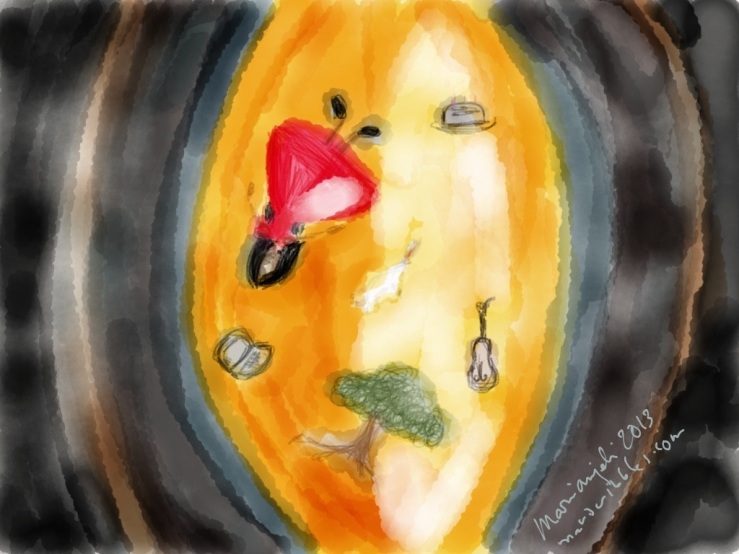