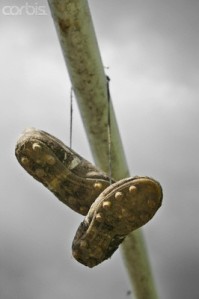 I used to play soccer for my school way back in high school. During the peak months of the season, we would do our weekly trainings at the often muddy BSU Oval (“soccer season” was synonymous to “rainy season”). We’d end up with abused hamstrings, soaked jerseys, browned socks, and caked cleats.

If the team captain was lax during our practice hour, we’d dive straight into doing drills and scrimmages. If she felt that it was time to give us a real workout, or if Sir Frael was there to see if she was keeping our team in shape, she’d make us run a couple of laps around the oval first.

I remember those laps well. We’d form two lines and start jogging off with energetic zeal. We’d do well through the quarter mark, the halfway point, and until we’d cover three quarters of the 400-something-meter oval. However, by the time we’d start the second lap, some would already relax into a walk but would hurriedly break off into doing a semi-slow-mo version of a jog once the captain would start barking and throwing commands again.

We’d usually do just two laps but if enthusiasm would overtake the captain, she’d add to that, making us do three, and sometimes four. Note that we had a pretty big oval. How my lungs and my legs held up during those warm-up sessions is beyond me. (Yes, those laps were just warm-up sessions.)

The breath-robbing laps would explain my familiarity with the term “second wind”. Good-ol-wikipedia defines it as “a phenomenon … whereby an athlete who is too out of breath and tired to continue [running] suddenly finds the strength to press on at top performance with less exertion.” Yeah, I experienced a lot of second winds during those days, alright. Just when I thought my legs were going to give way, the sight of the finish line would always send me running at top speed again.

I’ll be needing a big barrel of that second wind this week. Make that this month. UPeans and other holiday goers probably won’t be able to identify with me anymore at this point (yey for summer holidays!). But UKM studes would understand.

I started this semester off with a passionate note. But now, with deadlines and examinations lined up, with papers publically criticised (with the best of intentions of course) by well meaning professors, and with other equally important stuff in life to deal with – ayyy, my mind, my strength, and my heart feel like they’re already about to give way. And so I need a second wind.

I can feel it already rushing in though. The sight of the Finish line is giving me strength. It is renewing my almost drained passion, making me go, go, go – push a little bit harder, run a little bit faster.

To the rest of the drained and the weary – I’m with you. But now let’s all take that second wind and push through.